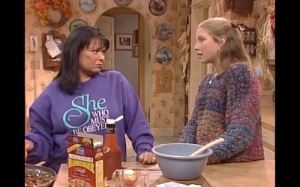 I call myself a Domestic Goddess-Roseanne Barr

How do I start this lovely post. Hmmmmm. Well. Let’s see. I was young when I got married. I had no idea what the hell I was doing. I was domestically challenged. I had a lot to learn. Fortunately I had a good teacher. Roger Darling was the best. Not the most patient. He laughed at me a lot. Which in turn made me cry. But then we became a good team, he and I. I’m writing on this subject because as I was getting the clean laundry from the dryer yesterday I realized that I had somehow washed and dried a roll of toilet paper with it. Who the hell does that??? Me. ADHD Girl on caffeine. I couldn’t seem to slow down enough to realize that I had grabbed a roll of almost depleted TP and threw it in with the wash?! Thankfully, it didn’t shred in the washer or the dryer. AND it didn’t get stuck on all of the clean clothes so that I had to re-wash them. Whew! It did however bring up some funny memories of other Domestic Goddess SNAFUs.

Like the time we were hanging wall paper and Roger told me to go make dinner for us. I had never cooked for him before. It was just hamburgers for God’s sake. But there I was standing in the kitchen, crying because I didn’t know what the hell I was doing. I would have rather hung wall paper. I KNEW how to do that. Roger Darling walked into the kitchen and saw me bawling. Hugged me and said, Honey it’s only burgers. We’ll cook together. It kind of led to a marriage long love affair with cooking together. I love to cook now. I think I’m better at it then he is. Really.

Or the time I was washing whites and I threw in a light colored shirt of Rog’s. When I pulled it out of the wash it had turned as white as the socks and dish towels that I washed with it. Guess I wasn’t supposed to use bleach on it. OOPS! Roger just laughed and shook his head. He said not to worry. That I’d learn. And learn I did. But I can tell you I still don’t like the whole Domestic Goddess thing. I’d rather have a root canal some days.

Another good laundry story from back in the day. Roger worked the midnight shift. It was the morning of his bachelor party and my bachelorette party. I had just gotten up and was doing laundry, running around a bit and cleaning. He asked me to iron his pants that he was going to wear to his bachelor party. I was a young, jealous girl. I didn’t like the fact that he was going to a strip club. I turned and looked at him, told him, point blank he could iron his own fucking pants! In no uncertain terms was I going to help him have a good time watching naked chicks dance. Nope, it wasn’t going to happen. And it didn’t. He DID iron his own fucking pants. Ha!

23 years later I’ve kind of gotten the hang of this Domestic Goddess title. I like the fact that Roger Darling and I are partners in housework, laundry, outdoor work, parenting. I never, ever felt like I was doing more than him. There have been times that he’s been more domestic than I have. It’s in his nature to nurture. Me, not so much. I’m a little flighty. But with Rog’s help, I’ve learned so much. And I keep learning. I’m thankful for such a patient, and helpful teacher.