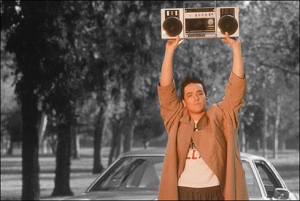 Jim Court: You’re not a permanent part of her life. You’re a distraction.
Lloyd Dobler: I’m the distraction that’s going with her to England, sir.

After all these years I still want Lloyd Dobler (John Cusack,sigh). There were so many times during my last viewing of the movie, Say Anything, that I just wanted to kick Diane Court (Ione Skye) in the crotch. Doesn’t she realize that Lloyd is the shit? He’s the man. He is the be all, end all. He worships the ground she walks on. Wants nothing more than to love her. Be with her. What does she do? She breaks his heart and gives him a fucking pen. What is that? Why do they portray smart women in movies as such dumb asses? Lloyd may be an under achiever. A kick boxer. But he has a plan. And that plan is to woo and love Diane. With his words, actions and a bit of Peter Gabriel. The movie came out when I was 19. I was a sappy girl. Still am. But at that time,  just his words melted my heart. To this day, they still do.

Lloyd Dobler: What I really want to do with my life – what I want to do for a living – is I want to be with your daughter. I’m good at it.

I like that he’s willing to give up everything. He doesn’t have much. But he’s willing to give up everything, just to be with her. To love her. Seriously, what woman my age hasn’t wanted a guy to stand outside their window with a boombox over their head, blaring the song, In Your Eyes? Hell I know I did. I STILL DO! Woo me with words. Woo me with music. Throw in a bit of funny. And I’ll be your Diane Court FOREVER!

Yes, I know this post is silly. But I just had to say it. I love Lloyd Dobler. There are men out there that are like him. You single girls, go find them.

18 thoughts on “No matter what you think, every girl wants a Lloyd Dobler”