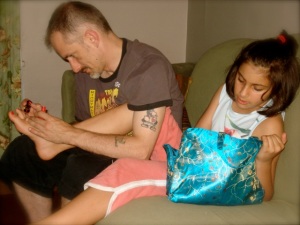 Daddy, I need another color, she says as she rummages through her ditty bag.

He says, Why Princess? We already have two different colors painted on your toes.

She says, I know, but I need at least three different colors on my nails.

She smiles at her daddy, surprised that he’s painting her toes. She thinks to herself how much she loves him.

As he paints her nails, he thinks, How did I get here? How did I fall in love with such beauty? How did her mother and I make such a wonderful, precocious creature?

He knows that he would do anything for her. He will too. Because he’s the Daddy. The White Knight. And the King. She looks up at him as he paints her nails. His heart melts. She looks at him and he sees himself and his beautiful wife. Their features melded together.

He looks into her mischevious and dark eyes. Thinks about how damn smart she is. She’s ten and she’s already smarter than him. He wonders how anyone could look at their child and not love them. Want to be a part of their lives. He thinks that some men are incredibly stupid to miss out on this every day miracle. This miracle of watching their future, grow, shift and change in front of them. There’s nothing better than this. Nothing better than her.

She tells him, Hurry up Dad. We have to let my toes dry before we can walk the dog. And we need to get something for lunch. I’m starved! Maybe we can color later. Or draw.

He looks at her, says, Of course Punkin. We’re almost done. Did you find another color of polish you wanted?

She says, Yep. It’ purple. You know, purple is my favorite.

He smiles at her. Finishes her nails. While they dry, they talk about what their next adventure will be.