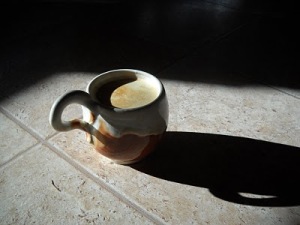 The Raven Haired Beauty stands in her country kitchen sipping coffee. The morning sun streaming through the windows and the back door.  She can feel a slight breeze filter in through the screen door. Her silly dogs are at her feet, looking up and begging for a treat. She smiles at them, then reaches for the treat jar. She grabs a couple of  Milk Bones. They sit pretty, and she rewards them with the crunchy goodness.

She fills up her coffee cup, adds cream and sugar. Stirs it with a teaspoon. As she sips the hot nectar of the gods, she thinks about her past. Thinks about him. His blue eyes that dazzled her. His long blonde hair. He was such an 80’s child. And so was she. They had HUGE hair. They did so much crazy shit together. They loved each other like nothing anyone had ever seen before. That young love is always the best. It burns the hottest. It’s like a super nova.

As her memories drift back to a simpler time in her life, she hears gravel crunch in the driveway. She wonders who the hell could be here at the ass crack of dawn? She peers out the screen door and sees an unfamiliar vehicle pull up and park. She looks. She looks again. It’s him. The love of her life. She hasn’t seen him in years. He gets out of the car. The blonde hair is short now, but those eyes. Those are still the same old twinkling blue they always were.

She throws her empty cup into the sink. She doesn’t care if it breaks. She just doesn’t fucking care. She slams out the door. She runs to him. He stands there and smiles. That same damn lopsided smile. She touches him to see if he’s real. They wrap their arms around each other. He lowers his head, kisses her passionately. They kiss again and again and again. They’re both breathless and giggling. They still haven’t said a word to each other. But then they never needed to. Their bodies always did the talking for them.

She tells him that she loves him. He says he loves her. Always has, always will. It just took awhile for him to figure it out. Then he says the best words she’s ever heard. He says, Hi Honey, I’m home. She looks up at him, into those beautiful baby blues, and says, finally.

6 thoughts on “She, A Raven Haired Beauty”