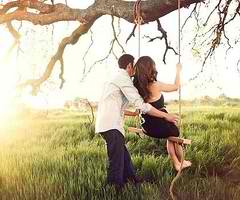 Why, why can’t we stop talking, loving, dreaming after 27 years like it was yesterday and I was 17?

Those are her words. Not mine. My sweet friend sent me an email a few days ago asking me so many questions. But this one stuck out the most. Why? Why do we fight the love we’ve been dreaming of? Sometimes for 27 years. Why?

She met him in a parking structure when she was 17 years old. A baby, but she knew what love was. She felt a connection with him immediately. She saw her future in him. He was a beautiful young man. She, a beautiful young woman. Their lives full of promise. They were young. He was a rebel, and so was she. He was in a band and she, well she gave the ultimate fuck off to the high school she graduated from. She smoked in the girl’s bathroom after she got her diploma. Ha! Okay so that wasn’t that rebellious, but she’s from Saline. We did what we could to rebel!

Her life turned away from her rebel boy. She moved away. He followed. She pushed him away. She married a man that she though she should be with. Who should have been the father of her children. This “Christian” man turned out to be the devil. He pretended to be a fine upstanding person, but was evil. He was a bully and he hurt her and their two children. She got away. Took care of her babies, and herself. Her rebel boy supported her through all of this. And yet, they still weren’t together. She needed stability and she was afraid he couldn’t give it to her. We women, we are always looking to be taken care of.

She met another man, and he was good to her. Her children. But he wasn’t her rebel boy, who was by now a full grown man. When she thought of him though, she still thought of 17 and the promise of that age. 17. I don’t think there’s an age we women remember more. 17.

When she wrote me, she asked my advice. I told her, Baby, RUN! Get on a plane, drive, take a bus or a train and get to him. NOW! Don’t wait anymore. 27 years is a long time to love someone from afar. Think with your heart. Go to him. Love him. With everything that you have. Don’t EVER live with regret. Know for sure that he is the one. I get the joy of seeing them reunite. Of her finally finding her way down an endless, broken road that will lead her back to him.