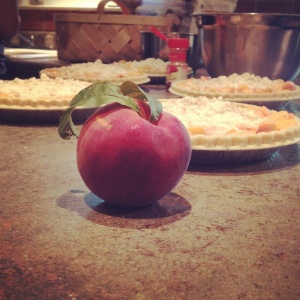 It’s funny how even the simple act of eating a juicy peach makes her think of him. Each time she bites into the flesh, the juices release, travel from her fingers and down her arm.  She licks the sweet nectar. Thinks of his  kisses, and his tongue playing lovingly in her mouth.

It brings back the memory of  the treat of a sweet peach and coffee while watching the misty sunrise from their fire escape. He was wrapped in a top sheet and she, their blanket. The air was crisp and cool.  She sat next to him, her cup of coffee in one hand, and the peach in the other. As she bit into it, the juices ran down the palm of  her hand. She tried to lick them up, but wasn’t fast enough in her efforts. It even ran down her arm. He chuckled at her, and set his coffee down on the metal grate of the fire escape. He grabbed her hand, and  took a bite of the peach at the same time as she did. He leaned over, and licked the juices from her lips.

There they were, holding the same peach, the nectar co-mingling on their chins, hands and arms. She kissed his fingers and licked them. He did the same to her. She giggled as she sat back and watch the devilish grin light up his entire face. They ate the rest of the peach, then threw the pit off the fire escape. She giggled again, and hoped it didn’t hit an innocent bystander on its way to the ground. He held her hand up to his mouth and sucked each finger with love and care. She sighed and he chuckled again.

She finally spoke and said, “Wait! I have to set my coffee cup down, or I’m going to spill it on the comforter.”

Her hands still sticky from peach juice, she held them under his chin and drew him in close for a deep kiss. He pulled the blanket down to her waist, wrapped his sheet around her, then held her close. He felt her warm breasts against his chest. She didn’t mind that his hands and arms were all sticky.  What’s better than a warm embrace and sweet, sticky kisses on a fire escape, at sunrise with the love of your life? Not one thing.

16 thoughts on “The Juice of a Ripe Peach and Sunrise”