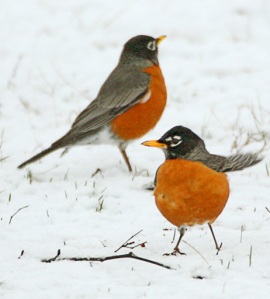 “Some birds are not meant to be caged, that’s all. Their feathers are too bright, their songs too sweet and wild. So you let them go, or when you open the cage to feed them they somehow fly out past you. And the part of you that knows it was wrong to imprison them in the first place rejoices, but still, the place where you live is that much more drab and empty for their departure.”

When I woke this morning it was full dark. I showered, did my hair and packed a lunch. In the midst of my running around, daylight came. I stepped outside to start my car. Though the morning was cold, I could feel a shift in season. It seemed as though the change came over night. I could smell newness in the air. Even with frost on the windshield and snow on the ground, I knew Spring was right around the corner. Could almost taste it. I wished for lilacs and the scent of freshly mowed grass. I knew those two wishes wouldn’t come true for awhile.

I sat in the driver’s seat and started my car. Jacked up the front and rear defrosters. As I headed back to the house I saw them, two Red-Breasted Robins. Their feathers appeared brighter in contrast to the stark white snow. I rejoiced in the confirmation that yes, change was coming soon. The snow would melt. The ground would thaw. With that, would come the faint scent of mud and fresh earth in the air. My soul would set fire, knowing that my favorite season was upon us yet again.

And I, along with nature would be reborn.